Waiwhetu Marae is the centre of a vibrant and long established urban papakāinga housing 120 whānau of Te Atiawa descendants near the banks of the Waiwhetu stream in Lower Hutt.

Amidst powerful economic and societal change it has supported generations of its whānau in a lifestyle that values whakapapa, whanaungatanga and manaakitanga as normal parts of daily life.

The people of Waiwhetu, and those whānau who live elsewhere, know who they are, where they are from and where they’re going. Inspired by their elders, they are ambitious for the health and education of their tamariki and have developed services and infrastructure to ensure the success of future generations.

Waiwhetu Marae – A good neighbour with a fine pacifist tradition

At the heart of Waiwhetu marae is the beautifully carved and panelled Arohanui ki te Tāngata (Peace to All Men) meeting house, named not for an ancestor but a philosophy, a legacy of the great Taranaki pacifist prophets Tohu Kakahi and Te Whiti o Rongomai.

“My grandfather was a clever man. He negotiated a deal with the politicians of the day that saw the land that the marae and houses are now on transferred freehold to a trust.”

The houses have since been sold to the whānau living in them and the marae is on freehold land set aside by legislation for the good of the public, both Māori and Taiuiwi. Te Atiawa are the kaitiaki.

Waiwhetu Marae is legislated as a treaty partner and welcomes manuhiri on a daily basis, including overseas visitors, delegations from other iwi, central and local government officials and representatives of NGOs and other nearby communities. It’s a good neighbour and offers a valuable interface between the Tauiwi and Māori worlds, but its primary focus is on the health and welfare of its own people. One of the places that people of all cultures gather is at Cafe Iwi, a business set up and run by whānau members.

The values that guide Waiwhetu, and the work that they do with whānau, directly align with the strengths-based E Tū Whānau kaupapa. This has fostered a natural alliance and E Tū Whānau has partnered with Waiwhetu to support a range of activities particularly around tamariki safety and support.

“Kaua e patu ngā mokopuna – don’t harm the child. It’s a simple but powerful statement that underpins everything we do with our tamariki,” says Peggy.

She’s talking about the success of the marae’s innovative holiday programme and its kōhanga reo, both of which are part of the Tamariki Ora-Well Child Service of the medical centre, situated across the road from the meeting house on Te Whiti Park.  Tamariki Ora runs parent and children forums where tamariki are encouraged to speak openly in a safe environment about the good, and not so good things happening at home.  These forums, says Peggy, help keep children safe.

“An issue comes out in the open and, we can then deal with it. I’ve had kids say to an uncle – ‘I don’t like you because you hit my cousin’. It’s about the kids knowing and telling other kids that hitting or violence of any kind is not normal.” 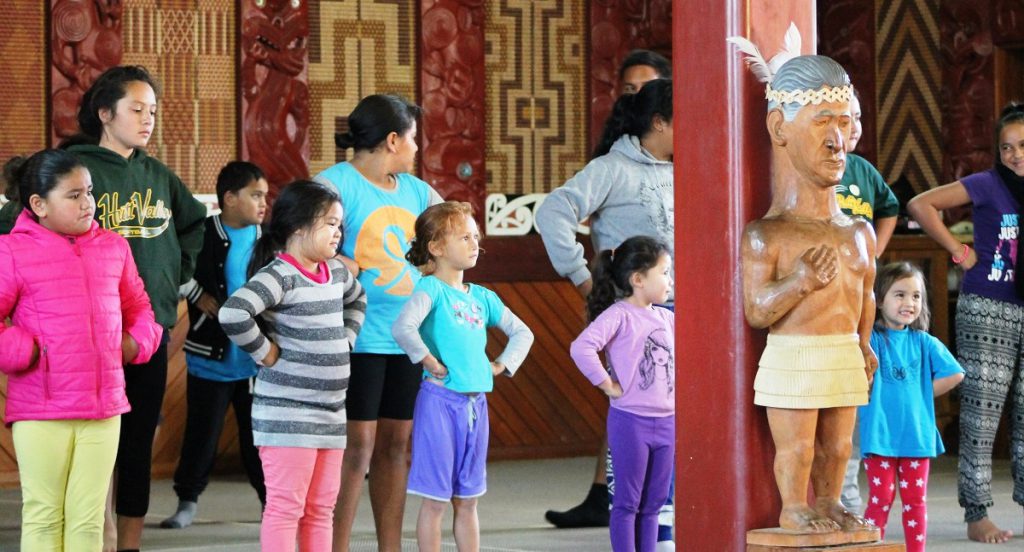 Tamariki of all ages participate in kapa haka at Waiwhetu Marae

A Tribal Council, made up of all kaumātua and kuia over 70 years of age, sits at the centre of the marae-hapū-iwi governance model.

The marae has its own kōhanga reo, an ancestral urupā, medical and cultural centres, a sports association covering 17 codes and radio station, all of which are funded in part by fishing quota proceeds managed by  Te Atiawa ki te Upoko o te Ika a Māui Pōtiki Trust. These 10 separate entities are all answerable to the Tribal Council.

Everything, says Peggy, goes past the Tribal Council.

“We’re getting the infrastructure ready for the next 50 years. It’s all about succession planning. We have to ensure our people retain a belief in their own systems because they work.”

Peggy says that the E Tū Whānau kaupapa sits well with this philosophy.

“To me, E Tū Whānau is about whānau working positively for their tamariki, their elders and for themselves. It empowers us to get on and do things and inspires us to continue living by our own values.”

Read about the  E Tū Whānau kaupapa and values, or browse resources